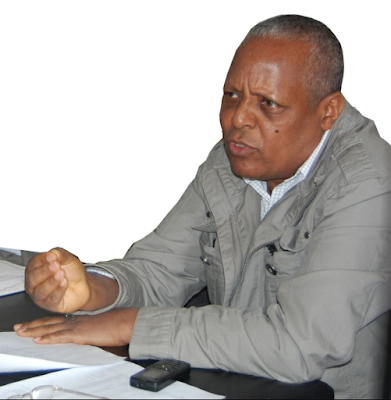 Addis Abeba Dec 29/2016 – The federal high court Arada branch has today granted the police additional 28 days to remand and investigate prominent opposition leader, Dr. Merera Gudina, chairman of the Oromo Federalist Congress (OFC).
The police have told the court that they were investigating Dr. Merera for “potential offenses related to terrorism,” indicating that the opposition leader, who the government maintains was only detained under the six-month state of emergency, is now likely facing potential charges of terrorism.
Speaking to the judge, Dr. Merera vehemently denied any terrorism allegations and said that he has spent his life teaching against the ideals of violence and terrorism, according to his lawyers. The hearing this afternoon was conducted in closed court as families, friends, colleagues and diplomats who have come to witness the hearing were all kept out of the court room.
Dr. Merera was detained upon arrival in Addis Abeba after finishing a tour to several European countries for more than three weeks.  During his tour Dr.Merera delivered a speech to members of the European Union Parliament on current political crisis and human rights violations in Ethiopia. Dr. Merera was joined by two other prominent invitees: Dr. Berhanu Nega, leader of the opposition Patriotic Ginbot 7 (G7), which is designated by Ethiopia’s ruling party dominated parliament as a “terrorist organization” and is now actively fighting the regime from the northern part of the country, and athlete Feyisa Lilessa, Olympic silver medalist who gave a significant impetus to a year-long Oromo protest that gripped Ethiopia when he crossed his arms in an X sign at the finishing line.
The government continued to maintain Dr. Merera is detained only for violating a section of the State of Emergency which prohibits contacts with “terrorist organizations”.
In a statement issued released on Dec. 20th, The Ethiopian embassy in Brussels, Belgium, said “Dr Merera Gudina was arrested…for violating directives of the state of emergency.”
“Despite his awareness of these provisions, Dr. Merera Gudina allegedly met and discussed with the leader of a group listed as terrorist in Brussels from 7-9 November 2016. Hence, the arrest of Dr Merera Gudina is not related with the meeting in the European Parliament but the alleged discussion with the leader of a terrorist group. If this meeting is confirmed by the investigation, this would have to be considered as a clear and deliberate violation of the state of emergency.”
According to Ethiopia’s infamous Anti-Terrorism Proclamation of 2009, police investigating potential suspects of terrorism can obtain from a court four months of each 28 days to remand and further investigate suspects.
Arguing for the additional 28 days of remand, the police have told the court that they were translating e-mails, electronic files, other documents and banking details related to Dr. Merera. An internal memo from a private bank which was circulating on social media since yesterday allegedly shows the Bank’s request to all its departments to provide the police all the banking details of Dr. Merera Gudina dating back to one year from Nov. 30 2015 to Nov. 30, 2016.
Today’s request to remand Dr. Merera Gudina is the second since his arrest on Nov. 30th. The next hearing is set for January 26, 2017.
Source: http://addisstandard.com/news-dr-merera-gudina-opposition-ofc-facing-potential-charges-terrorism/
Posted by Unknown at 8:57 AM No comments:

The 19th bench of the federal high court in Addis Ababa on Tuesday presided over the case of Colonel Demeke Zewdu and et al, who are leaders and members of a committee that spearheads the demands of the people of Wolkait, Tsegede and Telemt.
The defendants lead the demand by the people of north Gondar to reclaim their land that was illegally incorporated into Tigray region when the Tigrayan-led regime took power 25 years ago.
The prosecutor accused the defendants of taking missions from Patriotic Ginbot 7 to destabilize the country. They were also accused of killing and abduction of local officials in Gondar and Tigray.
Colonel Demeke Zewdu was accused of killing 11 regime security forces and injuring 7 police officers.
Five defendants appeared before the court on Tuesday but the Colonel, considered by many as the leader of the uprising and resistance in the Amhara region, remain at the Angereb prison in Gondar. Several attempts by regime security forces to bring him to Addis Ababa failed due to resistance by the people and the Amhara police. Six of the defendants are held at the Central Investigation prison in Addis Ababa, while nine are held in Gondar.
They are also accused of causing damages to property worth over 20 million dollars in Gondar and Gojam.
The court is adjourned to January 12, 2017 as per the request by the prosecutor for further investigations.

Posted by Unknown at 5:50 AM No comments: An Egyptian Foreign Ministry official called on Addis Ababa to stop what Cairo believes to be the provocation of crises between the two countries against the backdrop of Ethiopian accusations in October  that Cairo supports the anti-government Oromo ethnic group.

The two countries have been at loggerheads since Ethiopia started to construct the Grand Ethipian Renaissance Ethiopian Dam, which Egypt fears could reduce its share of Nile water.

“Addis Ababa knows well that Egypt has nothing to do with internal events in Ethiopia, but its attempts to involve Egypt’s name in the internal events it is going through will not be of use,” the Egyptian official told the UAE-based media outlet “24”.

“[Egyptian] relations with Ethiopia – no matter how they witness tensions – are historic relations … and cannot be ignored,” he added.

The Egyptian official denied allegations made by Ethiopian Foreign Minister Workenh Gebeyehu on Monday that Cairo supports the Oromo opposition group. He also said that “accusations” made by Addis Ababa “harm” the bilateral relations, adding that such relations improved under Egyptian President Abdel Fattah al-Sisi.

“Ethiopia has no evidence on Egypt’s involvement in such activity, and Ethiopian refugees in Egypt, like all refugees, respect the laws that regulate their residence, which ban political activities,” he added.

CategoriesAfricaEgyptEthiopiaNews
Creative Commons License This work by Middle East Monitor is licensed under a Creative Commons Attribution-NonCommercial-ShareAlike 4.0 International License. If the image(s) bear our credit, this license also applies to them. What does that mean? For permissions beyond the scope of this license, please contact us.
Spotted an error on this page? Let us know
Source: http://linkis.com/VCN7H

Posted by Unknown at 8:30 AM No comments:

Three police officers and a prisoner have reportedly been killed in a shootout between the federal police and prison police in a dispute to take custody of Colonel Demeke Zewdu, the leader of the movement in the Amhara region.
The Amhara region has been hit by anti-government protests since this summer after an uprising ensued the arrest of a committee that spearheads the demands of the people of Wolkait, Tsegede and Telemt. They are demanding to reclaim their land that was illegally incorporated into Tigray region when the Tigrayan-led regime took power 25 years ago.
The Colonel is at the Angereb prison in Gondar since July after he killed two TPLF operatives who came from Tigray to put him under their custody without a court warrant.
The federal police have been trying to take custody of Col. Demeke Zewdu for the last three days but the local police have refused resulting in a shootout between the two forces, according to ESAT’s sources.
Repeated attempts by the federal forces to put him under solitary confinement failed due to prisoners revolt against the move. One prisoner has reportedly been killed over the weekend.
The federal prosecutor in Addis Ababa on Wednesday brought charges against Col Demeke and et al accusing them of terrorism.
The charge accuses the plaintiffs were responsible for the loss of lives and property in the protests in the Amhara region which was sparked by the arrest of members of the committee that spearheads the demand by the people of Wolkait, Tsegede and Telemt.

Dr Fikru maru hordofa  who was sentenced to four years in prison for tax deviation and now  charged with terrorism accused of providing 70000 Ethiopian birrr for the distruction of Qilinto Prison. According to Ethiopian human right project, Fikru Maru  has been tortured and his health condition has deteriorated. The court alleges that an estimated 15 million birr worth of property was destroyed and 23 prisoners were killed. Research of Ethiopian human right project  shows that a total of 64 prisoners died, 23 were dead due to the fire and 45 were shot.

Abebe  Urgessa who was arrested following  the first round of #OromoProtest senteced to 15 years, he was accused of  throwing grenade which resulted in death of 1 and Injury of 40 people. Abebe Urgessa among the 38 individuals accused burning Qilinto Prison. Megerssa Worku, Adugna Kesso, Bilisuma Demena , Teshale Bekele,  Lenjesa Alemayehu have been set to walk free.

Posted by Unknown at 9:32 AM No comments: 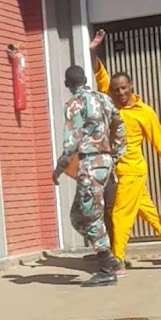 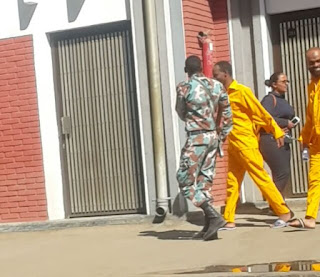 Posted by Unknown at 4:33 AM No comments:

By Amnesty International, 14 December 2016, Index number: AFR 25/5312/2016
Waves of protests against the government have taken place across various parts of Ethiopia since November 2015. These protests have consistently been quashed by Ethiopian security forces using excessive, sometimes lethal, force, which led to scores of injuries and deaths. The crackdown on protests was accompanied by increasingly severe restrictions on access to information and communications in large parts of the country by cutting off internet access, slowing down connections and blocking social media websites.

DOWNLOAD PDF
Posted by Unknown at 2:43 AM No comments:

Amhara Professional Union (APU) an organization dedicated to the defense and protection of the ideals and interests of the Amhara of Ethiopia in all sectors has initiated a petition to stop the purchase of the Tana Beles project by a Turkish corporation called BEDiSA Group.

The TPLF regime has been selling fertile Amhara land in the name of development while at the same time committing genocide of the Amhara people, forced eviction of farmers without adequate compensation, and imprisonment. The Amhara people will not benefit from the sale of Tana Beles, but instead the profits from these ventures go to the pocketbooks of TPLF leadership. Therefore, the Amhara Professional Union (APU) is suggesting to the BEDiSA Group to hold off all of its investment in Tana Beles until a government that represents the concerns and aspirations of the Amhara people is installed. The BEDiSA Group can invest in the Amhara region once a government that represents the wishes and aspirations of the Amhara people is in place and by then the hospitable Amhara people will welcome the group to invest in the region that will surely boost the investment’s value, safety, and profitability.
Thus, we are asking all Ethiopians and friends to please click on the link below, read the APU statement, and sign the petition. This petition will be delivered to Binai Boran, Chairperson of the BEDiSA Group.
https://www.change.org/p/stop-bedisa-group-s-land-grab-of-tana-beles-amhara-region-ethiopia

Source:http://www.zehabesha.com/stop-bedisa-groups-land-grab-of-tana-beles-amhara-region-ethiopia/
Posted by Unknown at 5:53 AM No comments:

ESAT News (December 9, 2016)
Former Ethiopian Prime Minister Tesfaye Dinka passed away on Thursday in Virginia, United States, where he lived in exile after the fall of the military regime.
The 77 year-old former diplomat served his country in a number of capacities. He also worked at the World Bank and other international institutions before his retirement.
Dinka was a graduate of the American University in Lebanon and an alumnus of the Syracuse University in New York.
Dinka, who took over the premiership in 1991, led the negotiating team of the former military government at the London Peace Conference where his government, the Eritrean People’s Liberation Front and the Ethiopian People’s Revolutionary Democratic Front, the party now in power in Ethiopia, were negotiating on the fate of Ethiopia after 17 years of civil war.
Dinka wrote a book titled “Ethiopia During the Derg Years: An Inside Account” but unfortunately passed away before the publishing of the book. According to Tsehai Publishers, his book will be released next month.
Dinka is survived by his wife, four children and four grand children.
Posted by Unknown at 5:50 AM No comments:


The inevitable for disintegration of Ethiopia, the cause and Abyssinian unbending arrogance