Global Solidarity:anti-gov protest in front of @Sverigesriksdag held denouncing State of emergency and killings in #Ethiopia.

The protest was held in front of the Swedish parliament,a swedish Mp from the social democratic party was among the guest speakers. 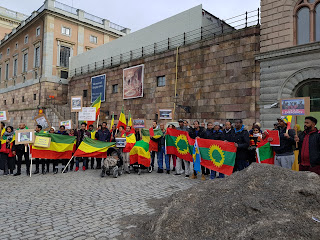 LEAKED: ANDM's draft plan for the coming year to be discussed on September 13.

Posted by Unknown at 3:26 AM No comments:

The Proclamation of special interest should address

In a country where federalism is opted,  a given legal policy matter  may be percieved by all states, or by group of  states or by one state. Accordingly, one can divide states' interest into three; universal, categorical, and special [particularistic] interest. Space will not allow a full flegde analysis of the first two types. I focus only  on special [particularistic] interest.

Article 49(5) of the FDRE Constitution articulates:

The special interest of the State of Oromia in Addis Ababa, regarding provision of social services or utilization of natural resources and other similar matters, as well as joint administrative matters arising from the location of Addis Ababa within the State of Oromia, shall be respected. Particulars shall be determined by law.

Pursuant to the second proviso of the same Article,  the coming [law] proclamation should address the followings:

Administration is a practical management and direction of the executive department and its agencies. In effect, it involves and starts from  representation in the Council and Administration of the City. The word 'joint' is important as it impresses fifty fifty per adminstration.

The phrase, 'other similar matters' have no objectivity. Two lines of interpretations can be accorded.
The narrow line of interpretation argues other similar matters is meant to show matters  that are immediate to those expressly mentioned. Accordingly, it includes land administration, free access to infrastructures, buildings, halls, industry, naming of the City and sub cities, security matters, participation on policy matters concerning matters affecting interests, and the like.
The second line of argument is broad. It includes automatic representation without election or permanent allocation of a percentage of seats of Addis Ababa City Council, addition of Afaan Oromo as working language of the City, levy and collect revenues and taxes, and the like.

⃣.  Addis Ababa as part of Oromia vs independent City:

The Constitution spells out that Residents of Addis Ababa have full measure of self government, and shall be represented in the House of Peoples' Representative, Article 49(2 and 4). These two Sub-articles give an impression that Addis Ababa is an independent City. It is by the same impression the Charters of the City are proclaimed, establishing the City as independent Chartered City Administration,   proclamations number 87/1997 and 361/2003.

The same Constitution emphasizes the location of Addis Ababa is [with] in  Oromia. In line with this scenario, Article 2(1) of the Revised Constitution of Oromia, proclamation number 46/2001,  defines Oromia as an '... uninterrupted territory...' The quoted phrase is intended to convey Oromia as landmass, the territory of which is connected from one point to the next without being interrupted. It, in effect, claims Addis Ababa as part and parcel of the State or City within the State.

The proclamation is expected to entertain and harmonize the status of the City as self government City while determining the special interest of Oromia as the location of the City is within the State.

Federalism inevitably implies intergovernmental relations.  Leave alone the existence of the interests of Federal Government and Oromia, which are two different governments in the Ethiopian Federation,  over Addis Ababa, the recognition of special interest of Oromia in the City Administration, joint administration in particular, necessitates the existence of intergovernmental relations.

The recognition of special interest of Oromia despite the City has full measure of self government and the responsibility of the City to the  Federal Government entails the tripartite interrelations, Article 49(2,3 and 5).

The proclamation should ascertain this trinity and establish a channeling institution among them.

Spill over effects are externalities those are not directly evolved in something. In one way or another, the recognition of special interest is a due acknowledgement of the existence of [negative] spill over effect.

Among different studies, a study conducted by Action Professionals Association for the People, aka APAP, indicated downstream users of rivers flowing out of Addis Ababa face health problems, environmental pollution and other  human suffering due to the pollution by liquid and solid products of industries and garbages of dwellers of the City, APAP, press release, 20/12/2005. Hence, it seems, the Constitution is trying to disseminate  the message that the spillover effect can only be redressed if and only if the special interest is recognized.

The proclamation, while determining the special interest, should address the scheme of redressing the spillover effects in particular.

Posted by Unknown at 6:48 AM No comments:

The report included details of extrajudicial killings, torture, and imprisonment committed in three regional states and the capital Addis Abeba
Liyat Fekade
Addis Abeba, June 09/2017 – Human Rights Council (HRCO) Ethiopia, a non-profit, non-governmental organization, has released 49 pages of report detailing widespread human right abuses committed by the security under the current State of Emergency, first declared on Oct. 08, 2016, and extended by four more months in March 2017.
In the report, which was originally published on May 29th, but was largely unseen due to the week-long nationwide internet blackout, HRCO documented details of abuses, including extrajudicial killings, torture, and imprisonment committed in 18 Zones and 42 Woredas of three regional states: Oromia, Amhara and Southern Nations, Nationalities and People’s Region (SNNPR) states as well as abuses committed in ten different Kifle Ketemas (administrative unites) in the capital Addis Abeba.
The detailed accounts of the report covered the months between October 2016 and May 2017 – of which HRCO said it held field assessments between October 2016 and February 2017.  Accordingly, HRCO published names, background information as well the circumstances of extrajudicial killings of 19 people in various places. Fifteen of those were from the Oromia regional state, the epicenter of the year-long antigovernment protests, while three were from SNNPR and one was from the Amhara regional state. The account of the 19 killed included the Oct. 10, 2016 gruesome killing by security officials of Abdisa Jemal and two of his brothers,  Merhabu Jemal and Tolla Jemal, in east Arsi Zone, Shirka Woreda, Gobesa 01 Kebele, some 270km south east of the capital Addis Abeba.
HRCO also documented the detention of 8,778 individuals from Oromia regional state followed by 5, 769 people from SNNPR, 640 from Amhara, 411 from the capital Addis Abeba and one from the Afar regional state. A total of 6, 926 individuals were also detained from unspecified locations, bringing the total number of people detained in the wake of the state of emergency to 22, 525. It also criticized the inhuman conditions faced by detainees in many of the detention camps.
Out of the 22, 525 people, 13, 260 were detained in several facilities including military camps, colleges and city administration halls located in Oromia regional state, while 5, 764 of them were detained in Amhara regional state; 2, 355 were detained in Afar and 430 were detained in the capital Addis Abeba. This list includes list of names such as journalist Elias Gebru and opposition politician Daniel Shibeshi, who have recently been charged after months of detention. HRCO also said 110 people were held at unknown locations.
HRCO’s report came a little over one month after the Ethiopian Human Rights Commission, (EHRC), a government body tasked to investigate recent anti-government protests that rocked Ethiopia, admitted in April that a total of 669 Ethiopians were killed during the 2016 widespread anti-government protests. EHRC’s report, however, has not been released to the wider public, yet.
According to the government’s own account more than 26 thousand Ethiopians were detained in various places including military camps. This number is including those who were detained prior to the state of emergency. More than 20 thousand have since been released but about 5,000 are currently facing trials in various places.
Owing to Ethiopia’s outright refusal to accept outside independent investigation, including from the UN Human Rights Commission, ERCO’s report stands as the only independent investigation into widespread state violence in Ethiopia. AS
Source:Addis Standard
Posted by Unknown at 3:01 PM No comments:

Posted by Unknown at 4:04 AM No comments:

Posted by Unknown at 4:51 PM No comments:

The Ethiopian government has extended a nationwide state of emergency for four months, hailing it as successful in restoring stability after almost a year of popular protests and crackdowns that cost hundreds of lives.
But while parts of Amhara, one of the hotbeds of the recent unrest, may be calm on the surface, IRIN found that major grievances remain unaddressed and discontent appears to be festering: There are even widespread reports that farmers in the northern region are engaged in a new, armed rebellion.
Human rights organisations and others have voiced concern at months of draconian government measures – some 20,000 people have reportedly been detained under the state of emergency, which also led to curfews, bans on public assembly, and media and internet restrictions.
“The regime has imprisoned, tortured and abused 20,000-plus young people and killed hundreds more in order to restore a semblance of order,” said Alemante Selassie, emeritus law professor at the College of William & Mary in the US state of Virginia. “Repression is the least effective means of creating real order in any society where there is a fundamental breach of trust between people and their rulers.”
The government line is far rosier.
“There’s been no negative effects,” Zadig Abrha, Ethiopia’s state minister for government communication affairs, told IRIN shortly before the measures were extended by four months, on 30 March.
“The state of emergency enabled us to focus on repairing the economic situation, compensating investors, and further democratising the nation… [and] allowed us to normalise the situation to how it was before, by enabling us to better coordinate security and increase its effectiveness.”
Clamping down
On 7 August 2016, in the wake of protests in the neighbouring Oromia region, tens of thousands of people gathered in the centre of Bahir Dar, the capital of Amhara. They had come to vent their anger at perceived marginalisation and the annexation of part of their territory by Tigray – the region from which the dominant force in Ethiopia’s ruling coalition is drawn.
Accounts vary as to what prompted security forces to open fire on the demonstration – some say a protestor tried to replace a federal flag outside a government building with its now-banned precursor – but by the end of the day, 27 people were dead.
That toll climbed to 52 by the end of the week. In all, some 227 civilians died during weeks of unrest in the Amhara region, according to the government. Others claim the real figure is much higher.
A six-month state of emergency was declared nationally on 9 October. Military personnel, under the coordination of a new entity known as the “Command Post”, flooded into cities across the country.
“Someone will come and say they are with the Command Post and just tell you to go with them – you have no option but to obey,” explained Dawit, who works in the tourism industry in the Amhara city of Gondar. “No one has any insurance of life.”
James Jeffrey/IRIN

Source:http://www.irinnews.org/analysis/2017/04/03/ethiopia-extends-emergency-old-antagonisms-fester
Posted by Unknown at 5:57 PM No comments: