Election 2015 in Great Britain: What’s in the party manifestos for Africa?

By Magnus Taylor and Hetty Bailey

Posted on April 29, 2015 by AfricanArgumentsEditor
Does the UK have an ‘Africa policy’? Magnus Taylor (Editor, African Arguments) and Hetty Bailey (Policy and Research Coordinator, Africa APPG) decided to find out. They have, between them, read all the main political party manifestos and summarised the main policies that will affect African countries and people from them.
Their conclusion: UK ‘Africa Policy’ is multi-faceted. Nowhere does a political party state an explicit policy towards the continent, but many policy areas such as defence, immigration, international development, tax and trade will affect the lives of people in African countries, and also those who might wish to visit or live in the UK. But the African continent, and indeed much of the rest of the world, is not a topic of major discussion in contemporary political discourse.
It is a truism to state that British general elections are decided by domestic politics. It is rare that events such as Iraq war cut through talk of domestic issues to be truly influential for the electorate. This year such a stereotype seems even more pronounced. Development policy, in particular, is relegated to the back-end of the manifestos. Foreign policy is about defending our borders or growing British trade. Africa’s non-appearance in the manifestos is a symptom of a wider disinterest in international affairs during this most insular of elections.
***
The Conservatives
MT: The Conservative Party manifesto has two different, competing approaches to the outside world. First, it is a place that Britain must defend itself from: “… [we live] in an increasingly dangerous and uncertain world, we will fulfil the most basic duty of government – to defend our country and keep it safe”. Policy towards immigration, defence and even the EU are influenced by this world view.
The second sees Britain as a brave mercantilist power, forging a path through choppy seas via its sharp businessmen and clever diplomats. This section is actually quite optimistic for ‘emerging economies’, into which classification, in this context, most African countries should be viewed.
For a start, the manifesto celebrates the fact that UK trade with emerging economies (particularly China) is up: “We have boosted our exports to emerging markets, opened new diplomatic posts in Africa, Asia and Latin America…to connect Britain to the fastest-growing economies in the world.” It’s a good point, the last ten years have seen unprecedented growth in African economies and opportunities exist to exploit this, both for the benefit of them and us. It also bemoans the fact that the UK is still too dependent on slow-growing European markets. British diplomacy is more than ever about ‘selling’ Britain Inc. to new buyers.
In the breezy optimism of David Cameron’s early days in opposition, a commitment to international development was used, in part, to help rid his party of its ‘nasty’ image. Five years down the road and it barely gets a look in. There is a predictable commitment to spend 0.7% of Gross National Income (GNI) on international development, but this is somewhat hidden away, presumably to avoid antagonising the party’s right flank, vulnerable to being wooed by UKIP, which would drastically cut our aid commitments.
But aid, says the manifesto, should benefit us as well as its recipients: “[Aid] helps prevent failed states from becoming a haven for terrorists…builds long-term markets for our businesses…[and] reduce[s] migration pressures”.
The manifesto does have something to say on what is becoming a fashionable subject in development discourse, that of ‘tax and transparency’. This is a global problem, which cuts across definitions of ‘developed’ and ‘developing’ and has created high-profile controversies in the UK itself with large companies and wealthy individuals accused of avoiding tax, mostly through sharp accountancy practises. David Cameron raised this at the G8 Summit in Northern Island in 2013. The manifesto says that a Conservative government would:
On immigration, once again we see the tension between the two parts of the Tory narrative. First, the manifesto claims that “[The Conservatives] will always be a party that is open, outward-looking and welcoming to people from all around the world”. But they also boast that “immigration from outside the EU has come down since 2010” (peculiar given their stated aim to trade more with ‘emerging’ economies) and often try to talk tough, such as with statements on how they have introduced the ‘deport first, appeal later’ principle for illegal immigrants (excluding those in asylum cases.)
Oddly, the only African country that gets a specific mention in the manifesto is Zimbabwe, where Britain is apparently committed to “stand up for the rule of law and human rights”, apparently more so than in South Sudan, Somalia or anywhere else.
Labour
HB: The Labour Party manifesto puts international issues requiring a global response at the centre of its foreign policy approach. These include climate change, security and tax. Their manifesto recognises the influence that Britain has in the world and intends to utilise this to uphold and advance ‘British values’ and interests.
…
Source:: strathink.net
Posted by Unknown at 1:26 PM No comments:

Posted by Unknown at 1:08 PM No comments:

By Fikrejesus Amahazion
Nestled in the turbulent Horn of Africa, Ethiopia is Africa’s oldest independent modern nation-state and second most populous. Discourse on Ethiopia has traditionally revolved around poverty, conflict, disease, and famine, yet in recent years it has experienced considerable economic growth, making it amongst “Africa’s top performing economies,” and the country has also made significant progress on several of the United Nations’ Millennium Development Goals. Furthermore, regional political maneuvers and ambitions have seen Ethiopia touted as “Africa’s Next Hegemon.” Although these developments are widely heralded within the new Ethiopian narrative, other critical issues have often been overlooked.
For example, while Ethiopia’s economic “miracle” has been much celebrated, it remains the second poorest country in the world according to the United Nations Development Programme and the Oxford Poverty and Human Development Initiative’sMultidimensional Poverty Index, the country continues to rank extremely low upon various socio-economic, governance, and development indicators, it still receives significant amounts of military, economic, and food aid, is plagued by considerable regional and ethnolinguistic-based inequalities (many arising through government cronyism), and it is also burdened by significantly high levels of unemployment (partly fueling mass migration).
Problematically, Ethiopia’s state-led development strategy is riddled with pervasive, systematic human rights abuses. Since the beginning of work on Ethiopia’s Gibe III Dam project in 2006, international human rights groups have repeatedly accused the regime in Addis Ababa of forcibly driving indigenous minority ethnic groups out of the Lower Omo Valley and endangering the indigenous Turkana community. Survival International, a UK-based rights group, has warned that the “Kwegu people of southwest Ethiopia are facing a food crisis, severe hunger, and the loss of their water and fish supplies due to the destruction of surrounding forests and the drying up of the river on which their livelihoods depend.”
The brutality characterizing the Gibe III Dam project is mirrored by the violence and repression accompanying Ethiopia’s “villagization” program, a vital component of the state’s agricultural development strategy. Dating back to the days of the murderous Dergue regime, and condemned by a spate of international rights groups, villagization entails the forcible relocation of indigenous communities from locations reserved for large foreign-owned plantations. Reports by rights groups list a plethora of human rights violations including beatings, killings, rapes, imprisonment, intimidation, and political coercion by the government and authorities. The program has also led to greater food insecurity, a destruction of livelihoods, and the loss of cultural heritage of ethnic groups. The deleterious effects of villagization are displayed in a report (based on first-person testimony) recently released by the Oakland Institute (OI), an international rights, advocacy, and environmental group. OI’s report vividly describes how, via “strongarm tactics reminiscent of apartheid South Africa, the Ethiopian regime has moved tens of thousands of people against their will to purpose-built communes that have inadequate food and lack health and education facilities to make way for large, foreign-owned commercial agriculture projects.”
In essence, Ethiopia’s socio-political climate is characterized by torture, oppression, and crackdowns on any perceived signs of dissent. Reports “detailing the arbitrary detention, beatings, and torture of journalists, bloggers, youth, and governmental opponents are widespread, including Ethiopia’s use of surveillance equipment to monitor the speech and interactions of the Ethiopian diaspora.”
Last year, documents released by renowned international journalist Glenn Greenwald also revealed that Ethiopia’s state surveillance activities were partly underwritten by the NSA.
However, there are signs that long-simmering grievances and tensions may boil over.Disenchantment and disillusionment, marked by claims of “repression, inequality and unemployment” have inspired large, frequent protests against the regime over the last few years. Last year, mass protests by Oromo civilians, especially students, were brutally crushed by Ethiopian authorities, while last week, a government organized rally, arranged in the aftermath of ISIS’ brutal murder of Ethiopian migrants in Libya, witnessed numerous arrests, injuries, and widespread clashes between security forces and protesters. During the rally, the government trumpeted political slogans, with an eye on upcoming elections, while government spokespersons urged potential migrants not to risk their lives by using dangerous exit routes. Demonstrators erupted in anger, denouncing the government as “thieves” and condemning the fact that Ethiopian migrants were only in Libya due to the deplorable conditions in Ethiopia.
With national “elections” on the near horizon, periods historically marked by boycotts, corruption and vote-rigging, violence, and repression, Ethiopia’s internal socio-political dynamics merit attention and should not be overlooked, particularly due to potential domestic and regional humanitarian and security implications. The migrant tragedy in Libya and the regime’s ongoing crackdowns display clearly that the “African Lion” is unwell. Moreover, they could augur that additional instability, upheaval, uprisings, and even a long-sought socio-political change are to come.
Source:eurasiareview
Posted by Unknown at 11:39 AM No comments:

The President of Zimbabwe, Robert Mugabe publicly refused a handshake from the King of Zulu: The Man behind the Xenophobia mantra. What is your take on this? He was also quoted as on the picture below

The man allegedly behind the xenophobia attacks on Africans in South Africa, the king of the Zulu. President Mugabe refused a handshake from him (the Zulu king) publically in the eyes of everyone and letter drops the hammer on South Africans
”It’s only in South  Africa that an illiterate villager thinks a qualified Medical  Doctor from  another African country is the reason for his unemployment”

Source:http://www.pijangonews.com/2015/04/president-of-zimbabwe-robert-mugabe.html
Posted by Unknown at 11:24 AM No comments:

If Ethiopia is so vibrant, why are young people leaving? 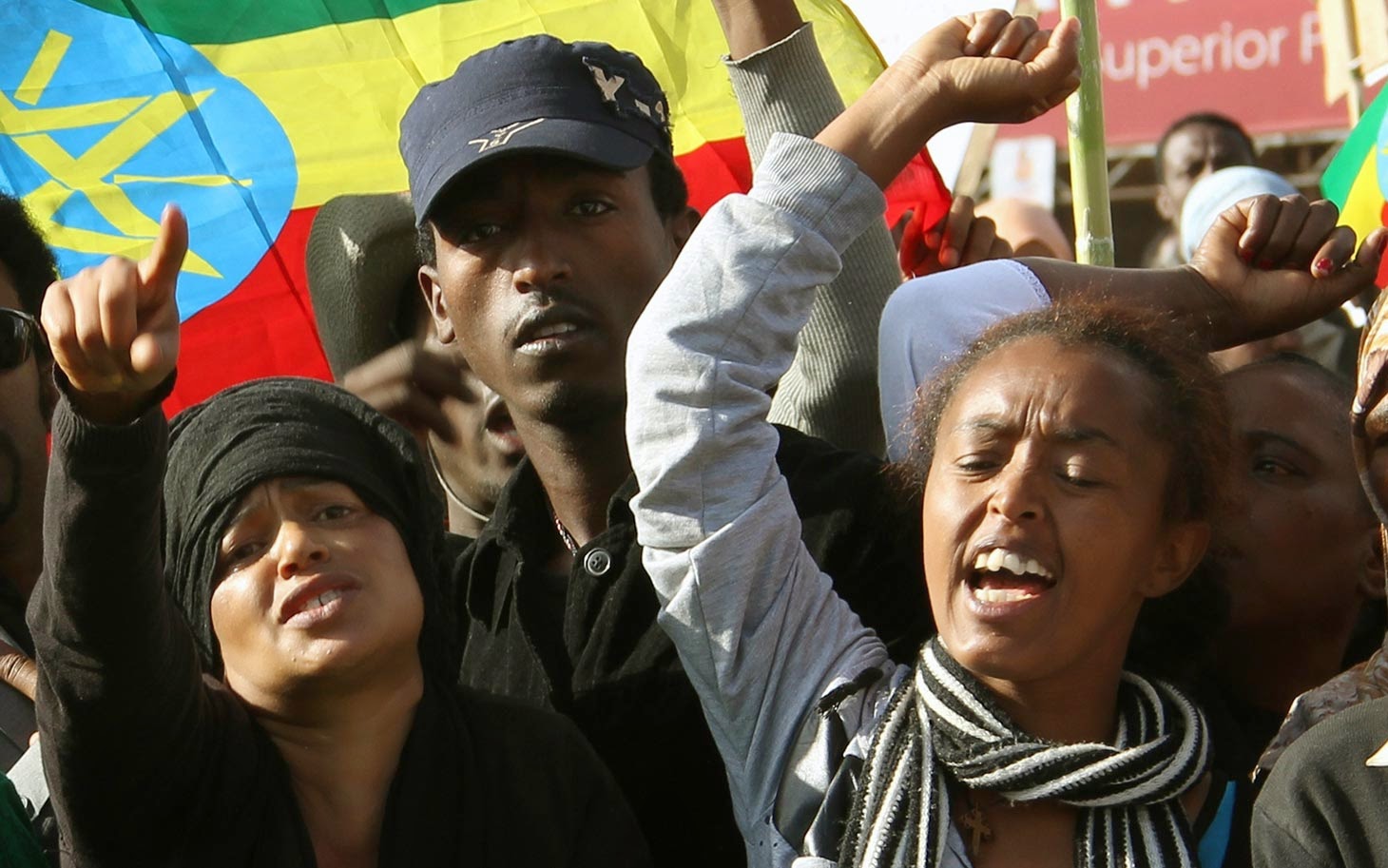 Posted by Unknown at 5:34 PM No comments:

Ethiopia: The Election That Isn’t

Source:freedomhouse.org
Posted by Unknown at 4:51 PM No comments: