The Macha-Tulama Association, the oldest Oromo civic organization, was legally founded in 1964 to promote the welfare (self-help) of the Oromo people in the areas of infrastructure development, economic growth, education and health. Soon after its foundation, however, the Abyssinian rulers of the Ethiopian empire banned the Macha-Tulama Association on the basis of their fear that an enlightened and self-sustaining Oromo region would be a danger to their unlimited exploitation of the Oromo people’s labor and the Oromo region’s resources. By their own admission, the goal of the Abyssinian rulers was to leave the Oromo people in a darker era, if possible by 100 years, behind Abyssinia.

The following is how the Monarchy reported its decision to murder the leaders of the Macha-Tulama Association in 1968 on its mouthpiece, “Addis Zemen” newspaper. Shortly after this report, Lt. Mamo Mazamir was hanged to death. Meanwhile, the ailing Lawyer Haile-Mariam Gemeda died in prison as a result of food poisoning. By “liquidating” these leaders of the Macha-Tulama Association and through the ban on the organization, it was assumed the Oromo people’s aspiration for justice and freedom would be extinguished once and for all, instead the Macha-Tulama movement grew into the Oromo national liberation movement of the last four decades. 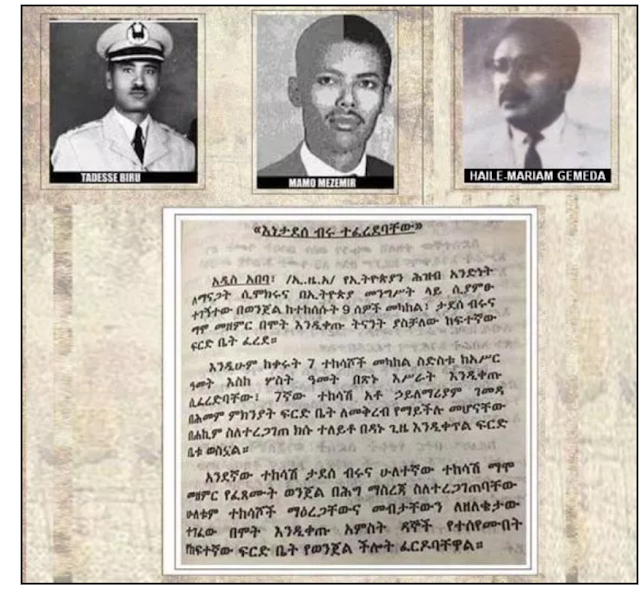 Email ThisBlogThis!Share to TwitterShare to FacebookShare to Pinterest
Labels: Because I am Oromo, Ethiopia, oromo