12-7-2016
Residents of Gonder town, 732km from the capital Addis Abeba, are now protesting against the Ethiopian government. The protest, which has been violent in some places has so far claimed the lives of seven people and police officers, accoridng to some trusted Ethiopian social media netizens.
Roads have been blocked, vehicles belonging to police and business magnets of the ruling Front have been gutted by fire.
The protest started after government intelligence officers attempted to detain a member of the Welkait Amhara Identity Committee member earlier today, Diaspora based Ethiopia media, ESAT reported.
The Committee is composed of people, who advance the voice of Welkait people, who claim that they are members of the Amhara ethnic group, when the government and the Tigre Region Administration says they belong to Tigre region. 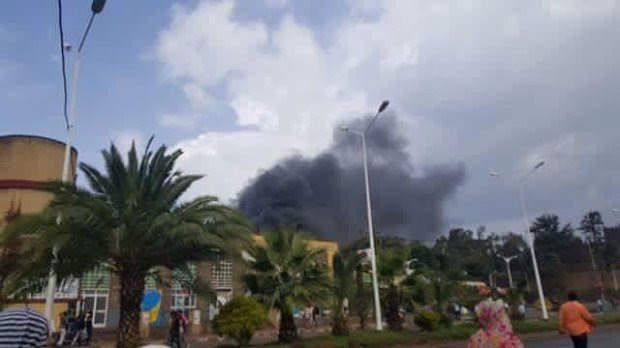 The latest photograph above shows a huge smoke in the city center area of Gonder city.
Details coming..
source:http://debirhan.com/?p=9991